Indonesian Manufacturing Will Be Raised with Collaborative Robots 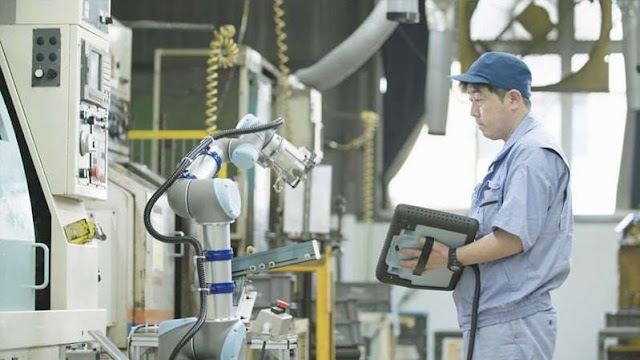 UMMATIMES - Universal Robots (UR), a market leader in collaborative robot technology (cobot) based in Denmark, encourages Indonesian manufacturing companies to immediately adopt the use of collaborative robots (cobots) as an effective solution to overcome the lack of skilled Human Resources (HR) and achieve high productivity. higher.
The manufacturing sector in Indonesia has contributed 19.87 percent to the national gross domestic product (GDP) during the second quarter of 2020.
Although the sector was hit by the COVID-19 pandemic and shrank to 4.31 percent on an annual basis (year-on-year / yoy) in the period July - September 2020, but in the first quarter of this year, the non-oil and gas industry was able to help. country in economic recovery.
According to IHS Market, Indonesia was able to mark the highest Purchasing Managers' Index (PMI) record in the last 10 years since the launch of the survey in 2011, with a sharp increase of 2.3 points from 50.9 points in February 2021 to 53.2 in March 2021.
In the ASEAN region, Indonesia has recorded the best performance in the last five months. In addition, various stimuli have also been provided by the government to ensure that the manufacturing sector develops rapidly and continues to reflect positive growth.
According to the report "Collaborative Robot Market by Payload, Component, Application, Industry, and Geography - Global Forecast to 2026" issued by the Research Institute "Markets and Markets", cobots are increasingly being adopted by various industries, especially in manufacturing because of its advantages. obtained, such as increased productivity and effective human resources.
Globally, the cobot market is expected to reach US $ 7,972 million by 2026 with a CAGR of 41.8%. For the APAC region, the cobot market is expected to surpass the European market in 2021, due to the increasing number of large-scale manufacturing industries such as the automotive, electronics and metal sectors using cobots.
The use of robotics technology has shown great benefits for industry in Indonesia and is increasingly helping the government in realizing its vision to build industry 4.0 Indonesia's manufacturing industry will greatly benefit from the existence of robotics technology which has the ability to complete repetitive tasks in a limited and structured space.
Cobots can work around the clock to produce consistent work with high-intensity work conditions without breaks. Indonesia has great potential in implementing automation in domestic industries, but currently the level of automation is still very low.
For per 10,000 employees, Indonesia's manufacturing industry only has 440 robots, lower than China and South Korea, which respectively had 732 and 2,589 robots per 10,000 employees in 2019.
Currently, the cobots produced by UR allow the company's human resources to be transferred to activities that have higher value, which can increase the productivity and quality of work of these human resources.
“Since the term 'Collaborative Robot' was coined, we have been at the forefront of the robotics industry. We also mark a whole decade since the first Universal Robots' cobots were deployed in South Asia. Safety is a very important priority and has become the entry point to the cobot market today. UR believes that developing a cobot must have affordable, lightweight and flexible elements that can provide fast ROI for the manufacturing industry, ”explained James McKew, Regional Director of Asia-Pacific at Universal Robots, written Tuesday (18/5/2021).
With an average payback period of at least 12 (twelve) months due to increased productivity, quality and consistency, Indonesian manufacturing companies will be able to estimate their return on investment (ROI) before the end of this year or early 2022.

Yokota Corporation, a Japan-based company that designs and manufactures bearings for racing, Factory Automation (FA) equipment, machinery for assembly, packaging and inspection, has selected the UR5 cobot to address its lack of human resources.
Initially, the company tried to engage part-time employees and rehired workers from other departments. However, these actions proved counterproductive. Traditional industrial robots were also considered a solution but were later found to be inadequate due to the need for additional space and the need for safety precautions.
With safety and flexibility as the main benefit factors, the adoption of the UR5 cobot leads to the establishment of a stable production system, resulting in a 20% increase in production without the need for additional human resources.
Since Asia is still the strongest market for the robot industry, Universal Robots strongly encourages local manufacturers to try out immediately in the factory.
“UR has reduced barriers enabling automation in areas previously considered too complex and expensive. We hope that this technology that we have, can help the manufacturing industry in Indonesia to achieve higher productivity and maintain a more effective use of human resources in the company, "concluded McKew.