After Dropping 1.76%, Today's JCI is predicted to decline again 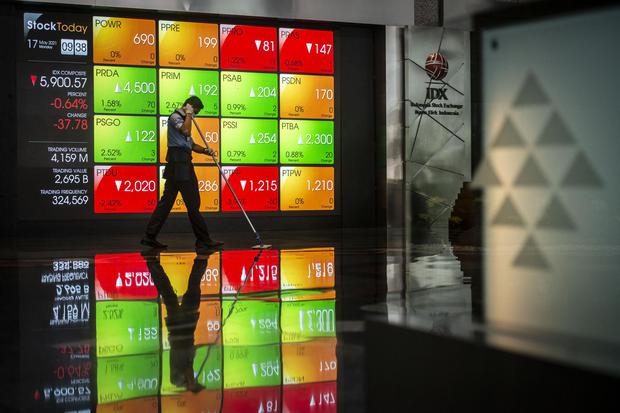 UMMATIMES - At the start of this week, Monday (17/5), the Composite Stock Price Index (JCI) closed down 1.76% to touch the level of 5,833. This decline is predicted to occur again in trading on Tuesday (18/5).
Head of Research for Reliance Sekuritas Indonesia, Lanjar Nafi, said that the JCI today has the potential to be depressed again. Meanwhile, based on his analysis, the support and resistance areas are in the range of 5,735 and 5,875.
According to him, investors were still worried about the side effects of the spread of Covid-19, which made several countries impose restrictions. "In addition, investors are affected by the prospect of inflation in the United States which makes developing country currencies threatened," said Lanjar.
Stocks that can be monitored technically include PT Bank Rakyat Indonesia Tbk (BBRI), PT Bank Mandiri Tbk (BMRI), PT Indofood CBP Sukses Makmur Tbk (ICBP), and PT Unilever Indonesia Tbk (UNVR).
Meanwhile, Artha Sekuritas Indonesia analyst Dennies Christoper Jordan also predicts the JCI will move lower in today's trading with support areas at 5,780 and 5,728 levels. While the resistance area is at the levels of 6,010 and 5,921.

Check out the following Databoks:

As before, the movement is still overshadowed by concerns about the increasing number of Covid-19 cases in several countries in Asia, including in Indonesia after the long Eid holiday.
"Technically, there is a strong weakening trend and will continue to weaken in the medium term," Dennies said.
Indosurya Bersinar Sekuritas CEO William Surya Wijaya assessed that JCI today still has the opportunity to experience a technical rebound. JCI movement area on today's trading is in the range of levels between 5,801 and 5,978.
William said, the pressure wave in the JCI movement still looks like it will not end. According to him, the index still looks like it will move lower, if the nearest support level is not able to be maintained. "So the JCI will still be corrected until some time to come," he said.
However, given the strong fundamentals of the Indonesian economy, which can be seen from published economic data, the JCI still has the opportunity to experience a technical rebound.
Some of the stocks that he said could be the attention of market players in today's trade include PT Telkom Indonesia Tbk (TLKM), PT Bank Mandiri Tbk (BMRI), PT Astra International Tbk (ASII), and PT Kalbe Farma Tbk (KLBF).