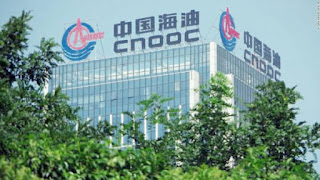 UMMATIMES - China National Offshore Oil Corporation, China's oil giant, will be removed from Wall Street next week, adding to renewed tensions between the United States and China. The New York Stock Exchange announced Friday that it will remove the China National Offshore Oil Corporation (CNOOC), China's third-largest oil company and its biggest offshore oil producer.
CNOOC is the fourth Chinese company to be issued from the United States stock exchange. Stock exchanges said in January that they would end stock trading in China Mobile, China Telecom and China Unicom to comply with Trump's orders. The two Chinese companies have stopped trading.
The CNOOC ban will take effect on March 9, 60 days after the company was added to the list to prohibit US investment, according to guidelines issued by the Treasury Department on January 27. CNOOC has been trading in New York since 2001.
CNOOC said Sunday it regretted the NYSE's decision, and warned in a filing with the Hong Kong Stock Exchange that delisting could affect share prices and volume. Hong Kong-listed CNOOC shares fell 1.1% on Monday.
The removal aims to comply with an executive order signed by former President Donald Trump in November, which prohibits Americans from investing in companies the US government suspects to be owned or controlled by the Chinese military. said Wall Street.