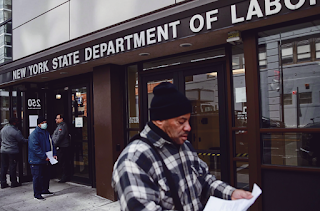 UMMATIMES - United States stock markets weakened in trading Thursday (18/2/2021), after data claims for unemployment benefits were still higher than expected.
Initial jobless claims last week hit 861,000, or much worse than economists projected in a Dow Jones survey that estimated the figure of 773,000. Said the US Department of Labor
The Dow Jones Industrial Average also dropped 230 points (0.73%) at 08:30 local time (21:30 WIB) and 30 minutes later it became minus 279.8 points (-0.88%) to 31,333.26. The S&P 500 fell 38.6 points (-0.98%) to 3,892.75 and the Nasdaq fell 184.9 points (-1.32%) to 13,780.63.
This year's Wallmart stock sales growth is expected to remain slow due to the effects of the pandemic. Wallmart shares plunged more than 5% after releasing the financial performance of the fourth quarter of 202 which was worse than market estimates.
Apple shares plunged 1.3% so that this week counted has fallen 4.6%. Investors realized their gains in technology stocks, so Tesla's shares also fell 1.2% and the week has fallen 3.3%.
"When you think that additional stimulus could affect the average consumer, with the CARES Act 1.0 and the second round of direct cash transfers it will boost savings and at this point we are very confident that the additional stimulus will indirectly turn the economy around," said Cliff Hodge.
Cornerstone Wealth's chief investment officer Cliff Hodge said finalizing an additional stimulus deal could provide further increases.